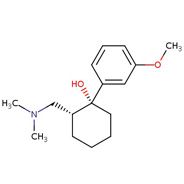 Product Name:
Tramadol
CAS Number:
27203-92-5
Indication:
Indicated in the treatment of moderate to severe pain. Consider for those prone to constipation or respiratory depression. Tramadol is used to treat postoperative, dental, cancer, and acute musculosketetal pain and as an adjuvant to NSAID therapy in patients with osteoarthritis.
Mode of Action:

Tramadol and its O-desmethyl metabolite (M1) are selective, weak OP3-receptor agonists. Opiate receptors are coupled with G-protein receptors and function as both positive and negative regulators of synaptic transmission via G-proteins that activate effector proteins. As the effector system is adenylate cyclase and cAMP located at the inner surface of the plasma membrane, opioids decrease intracellular cAMP by inhibiting adenylate cyclase. Subsequently, the release of nociceptive neurotransmitters such as substance P, GABA, dopamine, acetylcholine and noradrenaline is inhibited. The analgesic properties of Tramadol can be attributed to norepinephrine and serotonin reuptake blockade in the CNS, which inhibits pain transmission in the spinal cord. The (+) enantiomer has higher affinity for the OP3 receptor and preferentially inhibits serotonin uptake and enhances serotonin release. The (-) enantiomer preferentially inhibits norepinephrine reuptake by stimulating alpha(2)-adrenergic receptors.

Tramadol, a centrally-acting analgesic, exists as a racemic mixture of the trans isomer, with important differences in binding, activity, and metabolism associated with the two enantiomers. Although its mode of action is not completely understood, from animal tests, at least two complementary mechanisms appear applicable: binding of parent and M1 metabolite to μ-opioid receptors and weak inhibition of reuptake of norepinephrine and serotonin. Opioid activity is due to both low affinity binding of the parent compound and higher affinity binding of the O-demethylated metabolite M1 to μ-opioid receptors. In animal models, M1 is up to 6 times more potent than tramadol in producing analgesia and 200 times more potent in μ-opioid binding. Opiate antagonist naloxone only partially antagonized tramadol-induced analgesia.

Hepatic. The major metabolic pathways appear to be N- and O- demethylation and glucuronidation or sulfation in the liver. One metabolite (O-desmethyltramadol, denoted M1) is pharmacologically active in animal models. CYP3A4 and CYP2B6 facilitates the biotransformation of tramadol to N-desmethyl-tramadol. CYP2D6 facilitates the biotransformation of tramadol to O-desmethyl-tramadol.