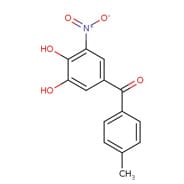 Product Name:
Tolcapone
CAS Number:
134308-13-7
Indication:
Used as an adjunct to levodopa/carbidopa therapy for the symptomatic treatment of Parkinson's Disease. This drug is generally reserved for patients with parkinsonian syndrome receiving levodopa/carbidopa who are experiencing symptom fluctuations and are not responding adequately to or are not candidates for other adjunctive therapies.
Mode of Action:

The precise mechanism of action of tolcapone is unknown, but it is believed to be related to its ability to inhibit COMT and alter the plasma pharmacokinetics of levodopa, resulting in an increase in plasma levodopa concentrations. The inhibition of COMT also causes a reduction in circulating 3-OMD as a result of decreased peripheral metabolism of levodopa. This may lead to an increase distribution of levodopa into the CNS through the reduction of its competitive substrate, 3-OMD, for transport mechanisms. Sustained levodopa concentrations presumably result in more consistent dopaminergic stimulation, resulting in greater reduction in the manifestations of parkinsonian syndrome.

The main metabolic pathway of tolcapone is glucuronidation