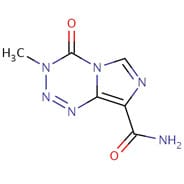 Product Name:
Temozolomide
CAS Number:
85622-93-1
Indication:
For the treatment of adult patients diagnosed with anaplastic astrocytoma whose disease has progressed after therapy with nitrosourea and procarbazine, as well as concomitantly with radiation therapy for treatment of newly diagnosed glioblastoma multiforme. Also used as maintenance therapy for glioblastoma multiforme.
Mode of Action:

Temozolomide is not active until it is converted at physiologic pH to MTIC. It is suggested that MTIC then alkylates DNA at the N7 position of guanine, O3 position of adenosine, and O6 position of guanosine, with the most common site being the N7 position. This methylation of guanine residues lead to single and double-strand DNA breaks and subsequent apoptotic cell death. It is suggested that the N7-methylguanine plays a critical role in the antitumor activity of the drug, as there is a correlation between the sensitivity of tumor cell lines to temozolomide and the activity of O6-alkylguanine alkyltransferase, which is the DNA repair protein that specifically removes alkyl groups at the O6 position of guanine. Cells lines that have lower levels of AGT are more sensitive to the cytotoxicity of temozolomide. It is also suggested that cytotoxic mechanism of temozolomide is related to the failure of the DNA MMR system to find a complementary base for methylated guanine. The DNA MMR system is involved in the formation of a number of proteins that remove methylated guanine. Evidence shows that when this repair process is targeted to the DNA strand opposite the O6-methylguanine, its inability to find the correct target leads to long-lived nicks in the DNA. The accumulation of these nicks lead to the inhibition of replication in the daughter cells, thereby blocking the cell cycle at the G_-M boundary.

Temozolomide is an imidazotetrazine deritave and an antineoplastic agent. It is a prodrug that has little to no pharmacological activity until it is hydrolyzed in vivo to 5-(3-methyltriazen-1-yl)imidazole-4-carboxamide (MTIC). After administration, temozolomide undergoes rapid, nonenzymatic hydrolysis at physiological pH to MTIC, which is the active form of the drug. MTIC is generated through the effect of water at the highly electropositive C4 position of temozolomide, causing the ring of temozolomide to open, release carbon dioxide, and generate MTIC.