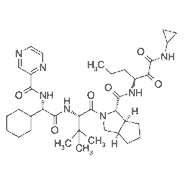 Product Name:
Telaprevir
CAS Number:
402957-28-2
Indication:
Treating chronic hepatitis C virus (genotype 1) infection in patients with compensated liver (due to liver diseases like cirrhosis) that are treatment naive or have failed therapy with interferons (either null or partial responders and treatment relapsers).
Mode of Action:

Telaprevir is an inhibitor of the HCV NS3/4A serine protease, necessary for the proteolytic cleavage of the HCV encoded polyprotein into mature forms of the NS4A, NS4B, NS5A and NS5B proteins and essential for viral replication. It belongs to the chemical class of alpha-ketoamids and binds to NS3/4A in a covalent but reversible manner.

Telaprevir is a direct-acting antiviral agent (DAA) against the hepatitis C virus. In a biochemical assay, telaprevir inhibited the proteolytic activity of the recombinant HCV NS3 protease domain with an IC50 value of 10 nM.

Telaprevir is extensively metabolized in the liver, involving hydrolysis, oxidation, and reduction. Multiple metabolites were detected in feces, plasma, and urine. After repeated-oral administration, the R-diastereomer of telaprevir (30-fold less active), pyrazinoic acid, and a metabolite that underwent reduction at the α-ketoamide bond of telaprevir (not active) were found to be the predominant metabolites of telaprevir. In vitro studies using recombinant human cytochrome P450 (CYP) isoforms indicated that CYP3A4 was the major CYP isoform responsible for telaprevir metabolism. However, non-CYP mediated metabolism likely plays a role after multiple dosing of telaprevir.

The highest documented dose administered is 1875 mg every 8 hours for 4 days in healthy subjects with telaprevir alone. In that study, the following common adverse events were reported more frequently with the 1875 mg q8h regimen compared to the 750 mg q8h regimen: nausea, headache, diarrhea, decreased appetite, dysgeusia, and vomiting. The two most common adverse events that caused the discontinuation of treatment are anemia and rash.