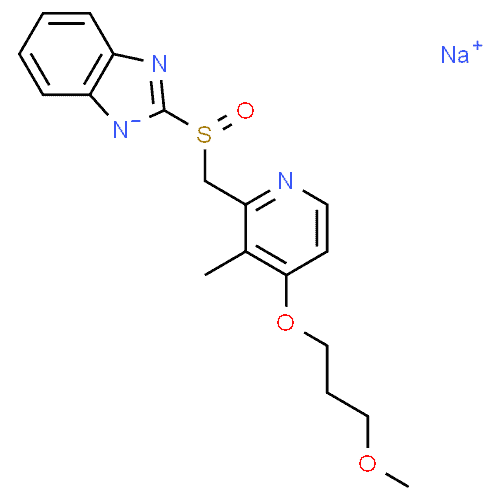 Rabeprazole is a selective and irreversible proton pump inhibitor. Rabeprazole suppresses gastric acid secretion by specific inhibition of the hydrogen-potassium adenosine triphosphatase (H+, K+-ATPase) enzyme system found at the secretory surface of parietal cells. It inhibits the final transport of hydrogen ions (via exchange with potassium ions) into the gastric lumen. Since the H+, K+-ATPase enzyme system is regarded as the acid (proton) pump of the gastric mucosa, rabeprazole is known as a gastric acid pump inhibitor. Rabeprazole does not have anticholinergic or histamine H2-receptor antagonist properties.

Approximately 90% of the rabeprazole dose is excreted in the urine as metabolites. These metabolites are mainly thioether carboxylic acid (TCA), the glucuronide of TCA, and mercapturic acid.

Despite its wide use, rabeprazole has only rarely been associated with hepatic injury. In large scale, long term trials of rabeprazole, serum ALT elevations occurred in less than 1% of patients and at rates similar to those with placebo or comparator drugs. In large case series of drug induced liver injury, rabeprazole has accounted for few instances of symptomatic acute liver injury. Only a few cases of clinically apparent liver disease due to rabeprazole have been published and the characteristics of the injury have not been well defined, but appear to be similar to the features of hepatic injury associated with other proton pump inibitors. Clinically apparent liver injury due to proton pump inhibitors typically arises within the first 4 weeks of treatment with symptoms of jaundice, nausea and fatigue and a hepatocellular or mixed pattern of serum enzyme elevations. Recovery is typically rapid upon withdrawal of the agent. Rash, fever and eosinophilia are rare, as is autoantibody formation. Instances of recurrence on rechallenge have been reported.