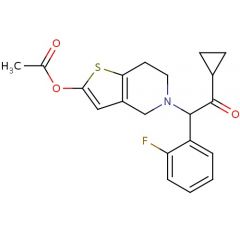 Product Name:
Prasugrel
CAS Number:
150322-43-3
Indication:
Indicated in combination with acetylsalicylic acid (ASA) to prevent atherothrombotic events in patients with acute coronary syndrome (ACS) who are to be managed with percutaneous coronary intervention (PCI). May be used in patients with unstable angina (UA), non-ST elevation myocardial infarction (NSTEMI), ST-elevation myocardial infarction (STEMI) who are to be managed with PCI. Prasugrel is not recommended in patients 75 years of age or greater, those that weigh<60kg, and patients with a history of stroke or transient ischemic attack due to increased risk of fatal and intracranial bleeding.
Mode of Action:

Prasugrel is an thienopyridine which inhibits ADP receptors by irreversibly acting on the P2Y12 receptor on platelets. The active metabolite of prasugrel prevents binding of adenosine diphosphate (ADP) to its platelet receptor, impairing the ADP-mediated activation of the glycoprotein GPIIb/IIIa complex. Prasugrel is proposed to have a similar mechanism of action to clopidogrel.

Prasugrel is a member of the thienopyridine class of ADP receptor inhibitors, like ticlopidine (trade name Ticlid) and clopidogrel (trade name Plavix). These agents reduce the aggregation (“clumping”) of platelets by irreversibly binding to P2Y12 receptors. Compared to clopidogrel, prasugrel inhibits adenosine diphosphate–induced platelet aggregation more rapidly, more consistently, and to a greater extent than do standard and higher doses of clopidogrel in healthy volunteers and in patients with coronary artery disease, including those undergoing PCI. The increased potency of prasugrel appears to be due to more efficient conversion to its active metabolite. However, it carries a higher risk of bleed compared to clopidogrel, which may be a result of its higher potency.