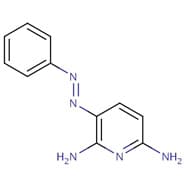 Product Name:
Phenazopyridine Hydrochloride
CAS Number:
136-40-3
Indication:
Phenazopyridine hydrochloride is indicated to relieve uncomfortable symptoms that occur as a consequence of mucosal irritation of the lower urinary tract in adults. The irritation may be a result of trauma, surgery, endoscopic procedures, infection, or the insertion of instruments or urinary catheters.14 Phenazopyridine may be used in combination with antimicrobial therapy but is not used as an antimicrobial agent. It contributes to the relief of discomfort and pain before antimicrobial therapy begins to take effect. It is important to note that the duration of treatment with this drug should last a maximum of 2 days.14 Phenazopyridine is available in many countries as an over the counter drug.
Mode of Action:

The full mechanism of action of phenazopyridine is not fully elucidated18, however, it is reported to exert a direct topical analgesic effect on the mucosal lining of the urinary tract via the inhibition of voltage-gated sodium channels17 and possibly group A nerve fibers, as suggested by the results of a study in rats.8 The above actions likely lead to the relief of unpleasant urinary symptoms.

Phenazopyridine, also known as Pyridium, is a urinary tract analgesic used for the short-term management of urinary tract irritation and its associated unpleasant symptoms such as burning and pain during urination. In the USA, this drug was previously marked by Roche but has been discontinued by the FDA.16 It is still used in various parts of the world. Ingestion of phenazopyridine is found to change the appearance of the urine by imparting an orange or red color, as it is considered an azo dye.

Phenazopyridine is metabolized in the liver, and acetaminophen has been discovered to be one metabolite of this drug.15 Hydroxylation is a pathway by which this drug is metabolized.13 In humans, 5-hydroxyl PAP is the major metabolite (48.3% of the dose) and small amounts of other hydroxy metabolites are produced.11,22 The metabolism of phenazopyridine produces aniline, which is likely associated with methemoglobinemia in some patients or in the case of an overdose. This dye accumulates in the skin, and yellow skin pigmentation has been observed when high doses of this drug have been taken.14 Triaminopyridine is also a metabolite of phenazopyridine.22 During a pharmacokinetic study, aniline contributed to approximately 6.9% of urinary metabolites. N acetyl-p-aminophenol (acetaminophen) contributes to about 18%, P-aminophenol (PAP) contributes 24%, and finally, DPP (unchanged phenazopyridine) contributes to about 41% of excreted urinary metabolites.

The oral LD50 of phenazopyridine in rats is 472 mg/kg.