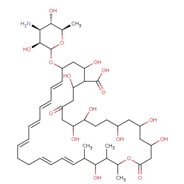 Nystatin is an antibiotic which is both fungistatic and fungicidal in vitro against a wide variety of yeasts and yeast-like fungi, including Candida albicans, C. parapsilosis, C. tropicalis, C. guilliermondi, C. pseudotropicalis, C. krusei, Torulopsis glabrata, Tricophyton rubrum, T. mentagrophytes. Nystatin acts by binding to sterols in the cell membrane of susceptible species resulting in a change in membrane permeability and the subsequent leakage of intracellular components. On repeated subculturing with increasing levels of nystatin, Candida albicans does not develop resistance to nystatin. Generally, resistance to nystatin does not develop during therapy. However, other species of Candida (C. tropicalis, C. guilliermondi, C. krusei, and C. stellatoides) become quite resistant on treatment with nystatin and simultaneously become cross resistant to amphotericin as well. This resistance is lost when the antibiotic is removed. Nystatin exhibits no appreciable activity against bacteria, protozoa, or viruses.