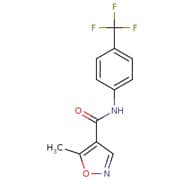 Product Name:
Leflunomide
CAS Number:
75706-12-6
Indication:
For the management of the signs and symptoms of active rheumatoid arthritis (RA) to improve physical function and to slow the progression of structural damage associated with the disease. Has also been used for the prevention of acute and chronic rejection in recipients of solid organ trasnplants and is designated by the FDA as an orphan drug for this use.
Mode of Action:

Leflunomide is a prodrug that is rapidly and almost completely metabolized following oral administration to its pharmacologically active metabolite, A77 1726. This metabolite is responsible for essentially all of the drug's activity in-vivo. The mechanism of action of leflunomide has not been fully determined, but appears to primarily involve regulation of autoimmune lymphocytes. It has been suggested that leflunomide exerts its immunomodulating effects by preventing the expansion of activated autoimmune lymphocytes via interferences with cell cycle progression. In-vitro data indicates that leflunomide interferes with cell cycle progression by inhibiting dihydroorotate dehydrogenase (a mitochondrial enzyme involved in de novo pyrimidine ribonucleotide uridine monophosphate (rUMP)synthesis) and has antiproliferative activity. Human dihydroorotate dehydrogenase consists of 2 domains: an _/_-barrel domain containing the active site and an _-helical domain that forms a tunnel leading to the active site. A77 1726 binds to the hydrophobic tunnel at a site near the flavin mononucleotide. Inhibition of dihydroorotate dehydrogenase by A77 1726 prevents production of rUMP by the de novo pathway; such inhibition leads to decreased rUMP levels, decreased DNA and RNA synthesis, inhibition of cell proliferation, and G1 cell cycle arrest. It is through this action that leflunomide inhibits autoimmune T-cell proliferation and production of autoantibodies by B cells. Since salvage pathways are expected to sustain cells arrested in the G1 phase, the activity of leflunomide is cytostatic rather than cytotoxic. Other effects that result from reduced rUMP levels include interference with adhesion of activated lymphocytes to the synovial vascular endothelial cells, and increased synthesis of immunosuppressive cytokines such as transforming growth factor-_ (TGF-_). Leflunomide is also a tyrosine kinase inhibitor. Tyrosine kinases activate signalling pathways leading to DNA repair, apoptosis and cell proliferation. Inhibition of tyrosine kinases can help to treating cancer by preventing repair of tumor cells.