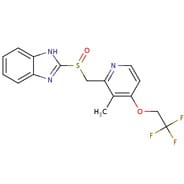 Lansoprazole belongs to a class of antisecretory compounds, the substituted benzimidazoles, that do not exhibit anticholinergic or histamine H_-receptor antagonist properties, but rather suppress gastric acid secretion by specific inhibition of the (H+, K+)-ATPase enzyme system at the secretory surface of the gastric parietal cell. Because this enzyme system is regarded as the acid (proton) pump within the parietal cell, Lansoprazole has been characterized as a gastric acid-pump inhibitor, in that it blocks the final step of acid production. This effect is dose-related and leads to inhibition of both basal and stimulated gastric acid secretion irrespective of the stimulus.

Lansoprazole, an acid proton-pump inhibitor similar to omeprazole, is used as an untiulcer drug in the treatment and maintenance of healing of duodenal or gastric ulcers, erosive and reflux esophagitis, NSAID-induced ulcer, Zollinger-Ellison syndrome, and Barrett's esophagus. Lansoprozole is active against Helicobacter pylori. The plasma elimination half-life of lansoprazole does not reflect its duration of suppression of gastric acid secretion. Thus, the plasma elimination half-life is less than two hours, while the acid inhibitory effect lasts more than 24 hours.

Hepatic. Two metabolites have been identified in measurable quantities in plasma (the hydroxylated sulfinyl and sulfone derivatives of lansoprazole). These metabolites have very little or no antisecretory activity. Lansoprazole is thought to be transformed into two active species which inhibit acid secretion by (H+, K+)-ATPase within the parietal cell canaliculus, but are not present in the systemic circulation.

Symptoms of overdose include abdominal pain, nausea and diarrhea.