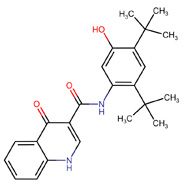 Product Name:
Ivacaftor
CAS Number:
873054-44-5
Indication:
For the treatment of cystic fibrosis (CF) in patients age 6 years and older who have a G551D mutation in the CFTR gene.
Mode of Action:

Cystic fibrosis is caused by any one of several defects in a protein, cystic fibrosis transmembrane conductance regulator, which regulates fluid flow within cells and affects the components of sweat, digestive fluids, and mucus. The defect, which is caused by a mutation in the individual's DNA, can be in any of several locations along the protein, each of which interferes with a different function of the protein. One mutation, G551D, lets the CFTR protein reach the epithelial cell surface, but doesn't let it transport chloride through the ion channel. Ivacaftor is a potentiator of the CFTR protein. The CFTR protein is a chloride channel present at the surface of epithelial cells in multiple organs. Ivacaftor facilitates increased chloride transport by potentiating the channel-open probability (or gating) of the G551D-CFTR protein.

Ivacaftor is a cystic fibrosis transmembrane conductance regulator (CFTR). In patients with the G551D mutation, Kalydeco, a pill taken two times a day with fat-containing food, helps the protein made by the CFTR gene function better and as a result, improves lung function and other aspects of CF such as increasing weight gain.

There have been no reports of overdose with Ivacaftor. The highest single dose used in a clinical study was 800 mg in a solution formulation without any treatment-related adverse events.