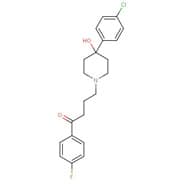 Product Name:
Haloperidol
CAS Number:
52-86-8
Indication:
For the management of psychotic disorders (eg. schizophrenia) and delirium, as well as to control tics and vocal utterances of Tourette's syndrome (Gilles de la Tourette's syndrome). Also used for the treatment of severe behavioural problems in children with disrubtive behaviour disorder or ADHD (attention-deficit hyperactivity disorder). Haloperidol has been used in the prevention and control of severe nausea and vomiting.
Mode of Action:

The precise mechanism whereby the therapeutic effects of haloperidol are produced is not known, but the drug appears to depress the CNS at the subcortical level of the brain, midbrain, and brain stem reticular formation. Haloperidol seems to inhibit the ascending reticular activating system of the brain stem (possibly through the caudate nucleus), thereby interrupting the impulse between the diencephalon and the cortex. The drug may antagonize the actions of glutamic acid within the extrapyramidal system, and inhibitions of catecholamine receptors may also contribute to haloperidol's mechanism of action. Haloperidol may also inhibit the reuptake of various neurotransmitters in the midbrain, and appears to have a strong central antidopaminergic and weak central anticholinergic activity. The drug produces catalepsy and inhibits spontaneous motor activity and conditioned avoidance behaviours in animals. The exact mechanism of antiemetic action of haloperidol has also not been fully determined, but the drug has been shown to directly affect the chemoreceptor trigger zone (CTZ) through the blocking of dopamine receptors in the CTZ.

Haloperidol is a psychotropic agent indicated for the treatment of schizophrenia. It also exerts sedative and antiemetic activity. Haloperidol principal pharmacological effects are similar to those of piperazine-derivative phenothiazines. The drug has action at all levels of the central nervous system-primarily at subcortical levels-as well as on multiple organ systems. Haloperidol has strong antiadrenergic and weaker peripheral anticholinergic activity; ganglionic blocking action is relatively slight. It also possesses slight antihistaminic and antiserotonin activity.