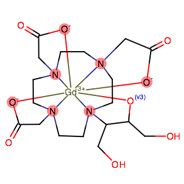 Product Name:
Gadobutrol
CAS Number:
770691-21-9
Indication:
For diagnostic use only. Indicated for adults and children age 2 and over for contrast enhancement during cranial and spinal MRI, and for contrast-enhanced magnetic resonance angiography (CE-MRA). Gadobutrol is particularly suited for the detection of very small lesions and for the visualization of tumors that do not readily take up contrast media. It may be a desired agent when the exclusion or demonstration of an additional pathology may influence the choice of therapy or patient management. It may also be suitable for perfusion studies in the diagnosis of stroke, detection of focal cerebral ischemia, and in studies of tumor perfusion.
Mode of Action:

MRI tissue visualization is dependent, in part, on variations in intensity of radiofrequency signals which occur due to differences in proton density, differences of the spin-lattice or longitudinal relaxation times (T1), and differences in the spin-spin or transverse relaxation times (T2). Gadolinium shortens T1 and T2 relaxation times. Greater signal enhancement is achieved with increased shortening of T1 and T2. The extent to which Gadolinium can shorten T1 and T2 is influenced by concentration in tissue, MRI field strength, and the relative ratio of transverse and longitudinal relaxation times. The recommended dose produced the greatest sensitivity of T1 shortening effect in T1-weighted magnetic resonance sequences. In T2-weighted sequences, the large magnetic moment of gadolinium induced local magnetic field inhomogenenities. At high concentrations used during bolus injections, T2-weighted sequences show a signal decrease.

Gadobutrol is not metabolized.

Lethality was observed in rodents after a single intravenous administration of 20 mmol/kg. This represents a dose of at least 2 orders of magnitude higher than the standard single diagnostic dose in humans (0.1 mmol/kg). No carcinogenicity studies have been conducted. No mutagenesis was observed in vitro in reverse mutation tests in bacteria, or in the HGPRT (hypoxanthine-guanine phosphoribosyl transferase) test using Chinese hamster V79 cells. Similarly, no mutagenesis was seen in chromosome abberation tests of human peripheral blood lymphocytes. It was also negative in in-vivo micronucleus tests in mice following a 0.5mmol/kg intravenous injection. No fertility or reproductive impairment was observed in male and female rates given doses 12.2 times human equivalent doses, based on body surface area. Intolerance reactions local to the injection site have been observed in rabbits after paravenous administration, and are associated with the infiltration of inflammatory cells, suggesting the possibility of local irritation if the contrast medium leaks around veins in a clinical setting.