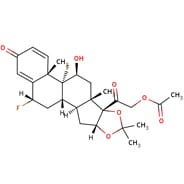 Product Name:
Fluocinonide
CAS Number:
0356-12-7
Indication:
A topical anti-inflammatory product for the relief of the inflammatory and pruritic manifestations of corticosteroid-responsive dermatoses.
Mode of Action:

Fluocinonide is a potent glucocorticoid steroid used topically as anti-inflammatory agent for the treatment of skin disorders such as eczema. It relieves itching, redness, dryness, crusting, scaling, inflammation, and discomfort. Fluocinonide binds to the cytosolic glucocorticoid receptor. After binding the receptor the newly formed receptor-ligand complex translocates itself into the cell nucleus, where it binds to many glucocorticoid response elements (GRE) in the promoter region of the target genes. The DNA bound receptor then interacts with basic transcription factors, causing the increase in expression of specific target genes. The anti-inflammatory actions of corticosteroids are thought to involve lipocortins, phospholipase A2 inhibitory proteins which, through inhibition arachidonic acid, control the biosynthesis of prostaglandins and leukotrienes. Specifically glucocorticoids induce lipocortin-1 (annexin-1) synthesis, which then binds to cell membranes preventing the phospholipase A2 from coming into contact with its substrate arachidonic acid. This leads to diminished eicosanoid production. Cyclooxygenase (both COX-1 and COX-2) expression is also suppressed, potentiating the effect. In another words, the two main products in inflammation Prostaglandins and Leukotrienes are inhibited by the action of Glucocorticoids. Glucocorticoids also stimulate the lipocortin-1 escaping to the extracellular space, where it binds to the leukocyte membrane receptors and inhibits various inflammatory events: epithelial adhesion, emigration, chemotaxis, phagocytosis, respiratory burst and the release of various inflammatory mediators (lysosomal enzymes, cytokines, tissue plasminogen activator, chemokines etc.) from neutrophils, macrophages and mastocytes. Additionally the immune system is suppressed by corticosteroids due to a decrease in the function of the lymphatic system, a reduction in immunoglobulin and complement concentrations, the precipitation of lymphocytopenia, and interference with antigen-antibody binding. Like other glucocorticoid agents Fluocinolone acetonide acts as a physiological antagonist to insulin by decreasing glycogenesis (formation of glycogen). It also promotes the breakdown of lipids (lipolysis), and proteins, leading to the mobilization of extrahepatic amino acids and ketone bodies. This leads to increased circulating glucose concentrations (in the blood). There is also decreased glycogen formation in the liver.

Fluocinonide is a potent glucocorticoid steroid used topically as anti-inflammatory agent for the treatment of skin disorders such as eczema. It relieves itching, redness, dryness, crusting, scaling, inflammation, and discomfort. [Wikipedia]