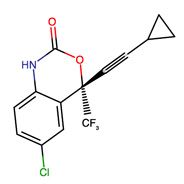 Similar to zidovudine, efavirenz inhibits the activity of viral RNA-directed DNA polymerase (i.e., reverse transcriptase). Antiviral activity of efavirenz is dependent on intracellular conversion to the active triphosphorylated form. The rate of efavirenz phosphorylation varies, depending on cell type. It is believed that inhibition of reverse transcriptase interferes with the generation of DNA copies of viral RNA, which, in turn, are necessary for synthesis of new virions. Intracellular enzymes subsequently eliminate the HIV particle that previously had been uncoated, and left unprotected, during entry into the host cell. Thus, reverse transcriptase inhibitors are virustatic and do not eliminate HIV from the body. Even though human DNA polymerase is less susceptible to the pharmacologic effects of triphosphorylated efavirenz, this action may nevertheless account for some of the drug’s toxicity.

Efavirenz (dideoxyinosine, ddI) is an oral non-nucleoside reverse transcriptase inhibitor (NNRTI). It is a synthetic purine derivative and, similar to zidovudine, zalcitabine, and stavudine. Efavirenz was originally approved specifically for the treatment of HIV infections in patients who failed therapy with zidovudine. Currently, the CDC recommends that Efavirenz be given as part of a three-drug regimen that includes another nucleoside reverse transcriptase inhibitor (e.g., lamivudine, stavudine, zidovudine) and a protease inhibitor or efavirenz when treating HIV infection.