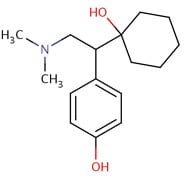 Desvenlafaxine is a selective serotonin and norepinephrine reuptake inhibitor. It lacks significant activity on muscarinic-cholinergic, H1-histaminergic, or _1-adrenergic receptors in vitro. Desvenlafaxine does not appear to exert activity against calcium, chloride, potassium and sodium ion channels and also lacks monoamine oxidase (MAO) inhibitory activity. It was also shown to lack significant activity again the cardiac potassium channel, hERG, in vitro. Compared to other SNRIs, desvenlafaxine undergoes simple metabolism, has a low risk of drug-drug interactions and does not have to be extensively titrated to reach a therapeutic dose. Some of the limitations of desvenlafaxine include moderate efficacy in the treatment of major depressive disorder, similar safety and tolerability profile to other SNRIs and possible transient discontinuation symptoms upon cessation of therapy.

The primary route of metabolism is via conjugation mediated by UGT isoforms. Desvenlafaxine also undergoes oxidative N-demethylation via cytochrome P450 3A4 to a minor extent.

The safety and tolerability of desvenlafaxine is similar to other SNRIs. Common side effects upon initiation or dose increase include increased blood pressure and heart rate, agitation, tremor, sweating, nausea, headache, and sleep disturbances. May cause sexual dysfunction and weight loss in some patients. May cause increases in fasting serum total cholesterol, LDL cholesterol, and triglycerides. Withdrawal effects may occur and thus, the dose of desvenlafaxine should be titrated down prior to discontinuation.