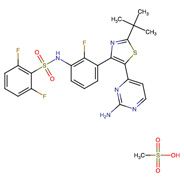 Product Name:
Dabrafenib Mesylate
CAS Number:
1195768-06-9
Indication:
Dabrafenib is indicated for the treatment of patients with unresectable or metastatic melanoma with BRAF V600E mutation as detected by an FDA-approved test.
Mode of Action:

Dabrafenib is an inhibitor of some mutated forms of BRAF kinases with in vitro IC50 values of 0.65, 0.5, and 1.84 nM for BRAF V600E, BRAF V600K, and BRAF V600D enzymes, respectively. Dabrafenib also inhibits wild-type BRAF and CRAF kinases with IC50 values of 3.2 and 5.0 nM, respectively, and other kinases such as SIK1, NEK11, and LIMK1 at higher concentrations. Some mutations in the BRAF gene, including those that result in BRAF V600E, can result in constitutively activated BRAF kinases that may stimulate tumor cell growth.

Dabrafenib caused an inhibition of phosphorylated ERK. This indicates a decrease in cell proliferation. Furthermore, within 24 hours of administration, downstream mediators of the MAPK pathway were inhibited.