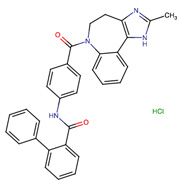 Product Name:
Conivaptan Hydrochloride
CAS Number:
168626-94-6
Indication:
For the treatment of euvolemic or hypervolemic hyponatremia (e.g. the syndrome of inappropriate secretion of antidiuretic hormone, or in the setting of hypothyroidism, adrenal insufficiency, pulmonary disorders, etc.) in hospitalized patients.
Mode of Action:

Conivaptan is a dual AVP antagonist with nanomolar affinity for human arginine vasopressin V1A and V2 receptors in vitro. This antagonism occurs in the renal collecting ducts, resulting in aquaresis, or excretion of free water.

Conivaptan is a nonpeptide, dual antagonist of arginine vasopressin (AVP) V1A and V2 receptors. The level of AVP in circulating blood is critical for the regulation of water and electrolyte balance and is usually elevated in both euvolemic and hypervolemic hyponatremia. The AVP effect is mediated through V2 receptors, which are functionally coupled to aquaporin channels in the apical membrane of the collecting ducts of the kidney. These receptors help to maintain plasma osmolality within the normal range by increasing permeability of the renal collecting ducts to water. Vasopressin also causes vasoconstriction through its actions on vascular 1A receptors. The predominant pharmacodynamic effect of conivaptan in the treatment of hyponatremia is through its V2 antagonism of AVP in the renal collecting ducts, an effect that results in aquaresis, or excretion of free water. Conivaptan's antagonist activity on V1A receptors may also cause splanchnic vasodilation, resulting in possible hypotension or variceal bleeding in patients with cirrhosis. The pharmacodynamic effects of conivaptan include increased free water excretion (i.e., effective water clearance [EWC]) generally accompanied by increased net fluid loss, increased urine output, and decreased urine osmolality.

CYP3A4 is the sole cytochrome P450 isozyme responsible for the metabolism of conivaptan. Four metabolites have been identified. The pharmacological activity of the metabolites at V1a and V2 receptors ranged from approximately 3-50% and 50-100% that of conivaptan, respectively.

Although no data on overdosage in humans are available, conivaptan has been administered as a 20 mg loading dose on Day 1 followed by continuous infusion of 80 mg/day for 4 days in hyponatremia patients and up to 120 mg/day for 2 days in CHF patients. No new toxicities were identified at these higher doses, but adverse events related to the pharmacologic activity of conivaptan, e.g. hypotension and thirst, occurred more frequently at these higher doses.