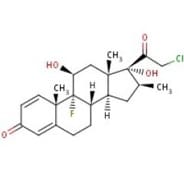 Product Name:
Clobetasol Propionate
CAS Number:
25122-46-7
Indication:
For short-term topical treatment of the inflammatory and pruritic manifestations of moderate to severe corticosteroid-responsive dermatoses of the scalp.
Mode of Action:

The precise mechanism of the antiinflammatory activity of topical steroids in the treatment of steroid-responsive dermatoses, in general, is uncertain. However, corticosteroids are thought to act by the induction of phospholipase A2 inhibitory proteins, collectively called lipocortins. It is postulated that these proteins control the biosynthesis of potent mediators of inflammation such as prostaglandins and leukotrienes by inhibiting the release of their common precursor arachidonic acid. Arachidonic acid is released from membrane phospholipids by phospholipase A2. Initially, however, clobetasol, like other corticosteroids, bind to the glucocorticoid receptor, which complexes, enteres the cell nucleus and modifies genetic transcription (transrepression/transactivation).

Like other topical corticosteroids, clobetasol has anti-inflammatory, antipruritic, and vasoconstrictive properties. It is a very high potency topical corticosteroid that should not be used with occlusive dressings. It is recommended that treatment should be limited to 2 consecutive weeks and therapy should be discontinued when adequate results have been achieved.

Metabolized, primarily in the liver, and then excreted by the kidneys.

Oral LD50 in rat and mouse is >3000 mg/kg. Topically applied clobetasol can be absorbed in sufficient amounts to produce systemic effects. Symptoms of overdose include thinning of skin and suppression of adrenal cortex (decreased ability to respond to stress).