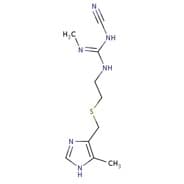 Cimetidine binds to an H2-receptor located on the basolateral membrane of the gastric parietal cell, blocking histamine effects. This competitive inhibition results in reduced gastric acid secretion and a reduction in gastric volume and acidity.

Cimetidine is a histamine H2-receptor antagonist. It reduces basal and nocturnal gastric acid secretion and a reduction in gastric volume, acidity, and amount of gastric acid released in response to stimuli including food, caffeine, insulin, betazole, or pentagastrin. It is used to treat gastrointestinal disorders such as gastric or duodenal ulcer, gastroesophageal reflux disease, and pathological hypersecretory conditions. Cimetidine inhibits many of the isoenzymes of the hepatic CYP450 enzyme system. Other actions of Cimetidine include an increase in gastric bacterial flora such as nitrate-reducing organisms.