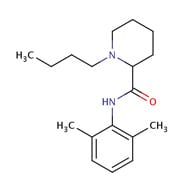 Product Name:
Bupivacaine
CAS Number:
2180-92-9
Indication:
For the production of local or regional anesthesia or analgesia for surgery, for oral surgery procedures, for diagnostic and therapeutic procedures, and for obstetrical procedures.
Mode of Action:

Local anesthetics such as bupivacaine block the generation and the conduction of nerve impulses, presumably by increasing the threshold for electrical excitation in the nerve, by slowing the propagation of the nerve impulse, and by reducing the rate of rise of the action potential. Bupivacaine binds to the intracellular portion of sodium channels and blocks sodium influx into nerve cells, which prevents depolarization. In general, the progression of anesthesia is related to the diameter, myelination and conduction velocity of affected nerve fibers. Clinically, the order of loss of nerve function is as follows: (1) pain, (2) temperature, (3) touch, (4) proprioception, and (5) skeletal muscle tone. The analgesic effects of Bupivicaine are thought to potentially be due to its binding to the prostaglandin E2 receptors, subtype EP1 (PGE2EP1), which inhibits the production of prostaglandins, thereby reducing fever, inflammation, and hyperalgesia.

Bupivacaine is a widely used local anesthetic agent. Bupivacaine is often administered by spinal injection prior to total hip arthroplasty. It is also commonly injected into surgical wound sites to reduce pain for up to 20 hours after surgery. In comparison to other local anesthetics it has a long duration of action. It is also the most toxic to the heart when administered in large doses. This problem has led to the use of other long-acting local anaesthetics:ropivacaine and levobupivacaine. Levobupivacaine is a derivative, specifically an enantiomer, of bupivacaine. Systemic absorption of local anesthetics produces effects on the cardiovascular and central nervous systems. At blood concentrations achieved with therapeutic doses, changes in cardiac conduction, excitability, refractoriness, contractility, and peripheral vascular resistance are minimal. However, toxic blood concentrations depress cardiac conduction and excitability, which may lead to atrioventricular block, ventricular arrhythmias and to cardiac arrest, sometimes resulting in fatalities. In addition, myocardial contractility is depressed and peripheral vasodilation occurs, leading to decreased cardiac output and arterial blood pressure. Following systemic absorption, local anesthetics can produce central nervous system stimulation, depression or both.

Amide-type local anesthetics such as bupivacaine are metabolized primarily in the liver via conjugation with glucuronic acid. The major metabolite of bupivacaine is 2, 6-pipecoloxylidine, which is mainly catalyzed via cytochrome P450 3A4.

The mean seizure dosage of bupivacaine in rhesus monkeys was found to be 4.4 mg/kg with mean arterial plasma concentration of 4.5 mcg/mL. The intravenous and subcutaneous LD 50 in mice is 6 to 8 mg/kg and 38 to 54 mg/kg respectively. Recent clinical data from patients experiencing local anesthetic induced convulsions demonstrated rapid development of hypoxia, hypercarbia, and acidosis with bupivacaine within a minute of the onset of convulsions. These observations suggest that oxygen consumption and carbon dioxide production are greatly increased during local anesthetic convulsions and emphasize the importance of immediate and effective ventilation with oxygen which may avoid cardiac arrest.