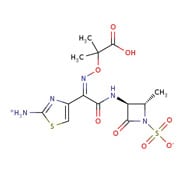 Aztreonam is a monocyclic beta-lactam antibiotic (a monobactam) originally isolated from Chromobacterium violaceum. Aztreonam exhibits potent and specific activity in vitro against a wide spectrum of gram-negative aerobic pathogens including Pseudomonas aeruginosa. It has no useful activity against gram-positive bacteria or anaerobes, but has very broad spectrum against gram-negative aerobes, including Pseudomonas aeruginosa. This has given it the nickname "the magic bullet for aerobic gram-negative bacteria". Aztreonam, unlike the majority of beta-lactam antibiotics, does not induce beta-lactamase activity and its molecular structure confers a high degree of resistance to hydrolysis by beta-lactamases (such as penicillinases and cephalosporinases) produced by most gram-negative and gram-positive pathogens; it is, therefore, usually active against gram-negative aerobic microorganisms that are resistant to antibiotics hydrolyzed by beta-lactamases. It is active against many strains that are multiply-resistant to other antibiotics, such as certain cephalosporins, penicillin, and aminoglycosides. Aztreonam maintains its antimicrobial activity over a pH range of 6 to 8 in vitro, as well as in the presence of human serum and under anaerobic conditions.

Approximately 6 to 16% metabolized to inactive metabolites by hydrolysis of the beta-lactam bond, resulting in an open-ring compound.