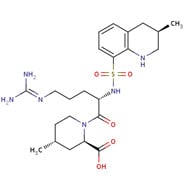 Product Name:
Argatroban
CAS Number:
74863-84-6
Indication:
Argatroban is indicated for prevention and treatment of thrombosis caused by heparin induced thrombocytopenia (HIT). It is also indicated for use in patients with, or at risk for, HIT who are undergoing percutaneous coronary intervention.
Mode of Action:

Argatroban is a synthetic direct thrombin inhibitor derived from L-arginine indicated as an anticoagulant for prophylaxis or treatment of thrombosis in patients with heparin-induced thrombocytopenia. Argatroban is a direct thrombin inhibitor that reversibly binds to the thrombin active site. Argatroban does not require the co-factor antithrombin III for antithrombotic activity. Argatroban exerts its anticoagulant effects by inhibiting thrombin-catalyzed or -induced reactions, including fibrin formation; activation of coagulation factors V, VIII, and XIII; protein C; and platelet aggregation. Argatroban is highly selective for thrombin with an inhibitory constant (Ki) of 0.04 µM. At therapeutic concentrations, Argatroban has little or no effect on related serine proteases (trypsin, factor Xa, plasmin, and kallikrein). Argatroban is capable of inhibiting the action of both free and clot-associated thrombin.

Liver via hydroxylation and aromatization of the 3-methyltetrahydroquinoline ring. Age and gender do not substantially affect the pharmacodynamic or pharmacokinetic profile of argatroban.