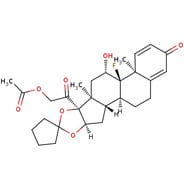 Product Name:
Amcinonide
CAS Number:
51022-69-6
Indication:
For the relief of the inflammatory and pruritic manifestations of corticosteroid-responsive dermatoses.
Mode of Action:

The mechanism of the anti-inflammatory activity of the topical steroids, in general, is unclear. However, corticosteroids are thought to act by the induction of phospholipase A2 inhibitory proteins, collectively called lipocortins. It is postulated that these proteins control the biosynthesis of potent mediators of inflammation such as prostaglandins and leukotrienes by inhibiting the release of their common precursor, arachidonic acid. Arachidonic acid is released from membrane phospholipids by phospholipase A2. Amcinonide has affinity for the glucocorticoid receptor. It has weak affinity for the progesterone receptor, and virtually no affinity for the mineralocorticoid, estrogen, or androgen receptors.

Results from acute toxicity studies do not indicate that any risk of acute intoxication is to be expected following a single dermal application of an overdose (application over a large area under conditions favorable to absorption) or inadvertent oral ingestion.