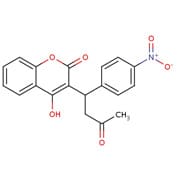 Product Name:
Acenocoumarol
CAS Number:
152-72-7
Indication:
For the treatment and prevention of thromboembolic diseases. More specifically, it is indicated for the for the prevention of cerebral embolism, deep vein thrombosis, pulmonary embolism, thromboembolism in infarction and transient ischemic attacks. It is used for the treatment of deep vein thrombosis and myocardial infarction.
Mode of Action:

Extensively metabolized in the liver via oxidation forming two hydroxy metabolites and keto reduction producing two alcohol metabolites. Reduction of the nitro group produces an amino metabolite which is further transformed to an acetoamido metabolite. Metabolites do not appear to be pharmacologically active.

The onset and severity of the symptoms are dependent on the individual's sensitivity to oral anticoagulants, the severity of the overdosage, and the duration of treatment. Bleeding is the major sign of toxicity with oral anticoagulant drugs. The most frequent symptoms observed are: cutaneous bleeding (80%), haematuria (with renal colic) (52%), haematomas, gastrointestinal bleeding, haematemesis, uterine bleeding, epistaxis, gingival bleeding and bleeding into the joints. Further symptoms include tachycardia, hypotension, peripheral circulatory disorders due to loss of blood, nausea, vomiting, diarrhoea and abdominal pains.