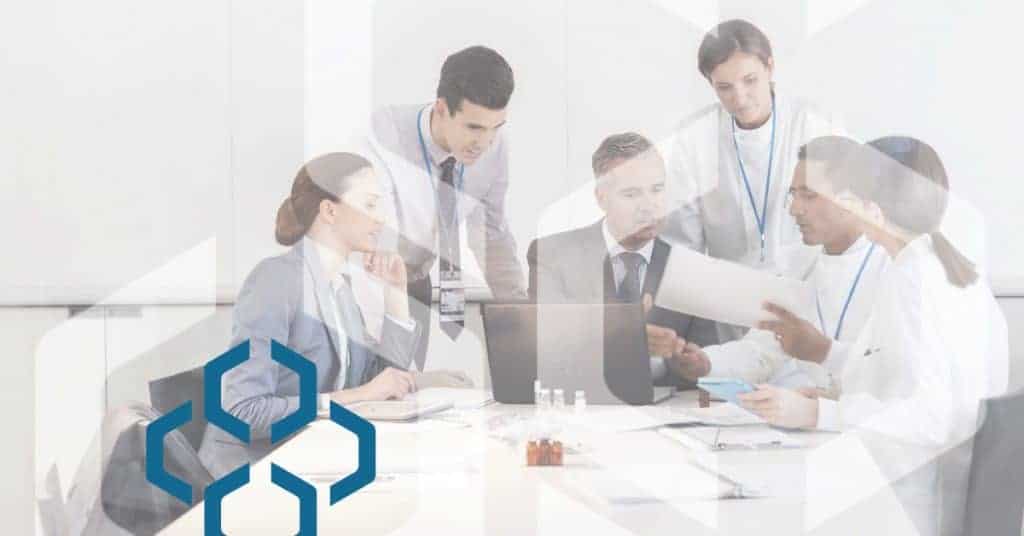 Situated between the NDA and the ANDA is an increasingly popular drug commercialization pathway – the 505(b)(2) – and it potentially offers pharmaceutical companies clear advantages.

But why is there increased attention, and is it a good fit for your drug candidate?

Some History: Hatch-Waxman & 505(b)(2)
The 505(b)(2) application pathway was created in 1984 as part of the Hatch-Waxman Act, as it has become known, in order to rectify the scarcity of generic approvals in the U.S. at the time. [Its official name is the Drug Price Competition and Patent Term Restoration Act, which created new sections of the Federal Food, Drug and Cosmetic Act.]

Hatch-Waxman, in Section 505 of the act, defined a number of different types of drug applications (aside from an OTC drug relying on an existing monograph): 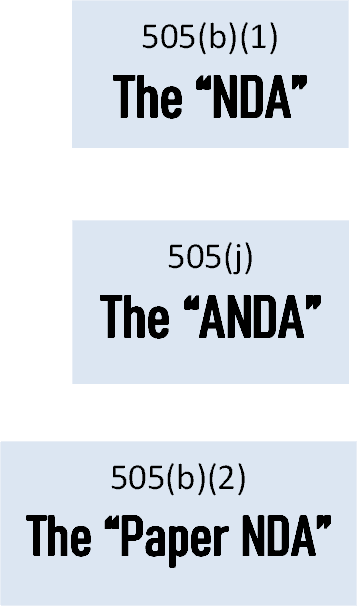 An ANDA (“Abbreviated NDA”), defined in section 505(j) of the act, is an application intended to demonstrate “equivalence” (meaning an identical API, in the same  dosage form, with identical strength, efficacy, route of administration, quality,  therapeutic use and more) to a previously approved NDA product.

The “Paper NDA,” as the 505(B)(2) has been branded, is essentially an existing approved product with some novelty. It might be a new therapeutic application, new delivery mechanism, a different strength, or something else, but it relies on an existing approved product and its attendant studies – sometimes performed by others. A 505(b)(2) application will typically contain full safety and efficacy studies, but some portion of the data comes from an external, existing source.

ANDA versus 505(b)(2): What About Cost and Exclusivity?
A 505(b)(2) is more expensive than a typical ANDA, but it is still vastly cheaper than an NDA.

What accounts for the higher cost? The applicant typically must conduct some clinical studies to bridge the difference between its proposed product and the reference brand product.

This higher cost confers some benefits – including a period of post-launch exclusivity. The duration of exclusivity depends on the compound and the indication. For example, orphan indications can receive up to 7 years, while a drug compound requiring only phase I studies will not receive any marketing exclusivity period.

How Long Does a 505(b)(2) Filing Typically Take?
A traditional NDA, in which you are developing a novel therapeutic, requires lead identification, formulation, toxicology and further development, followed by efficacy & safety research and ultimately phases I through III of clinical studies. The pathway for a traditional NDA is usually 10 to 12 years. Even with a fast-tracked compound, less than seven years would be considered incredibly fast.

At the other end of the spectrum, generic drugs usually move through the ANDA process in 18 months or so.

Which Drug Projects are Suitable 505(b)(2) Candidates, and What Are Some of the Benefits? 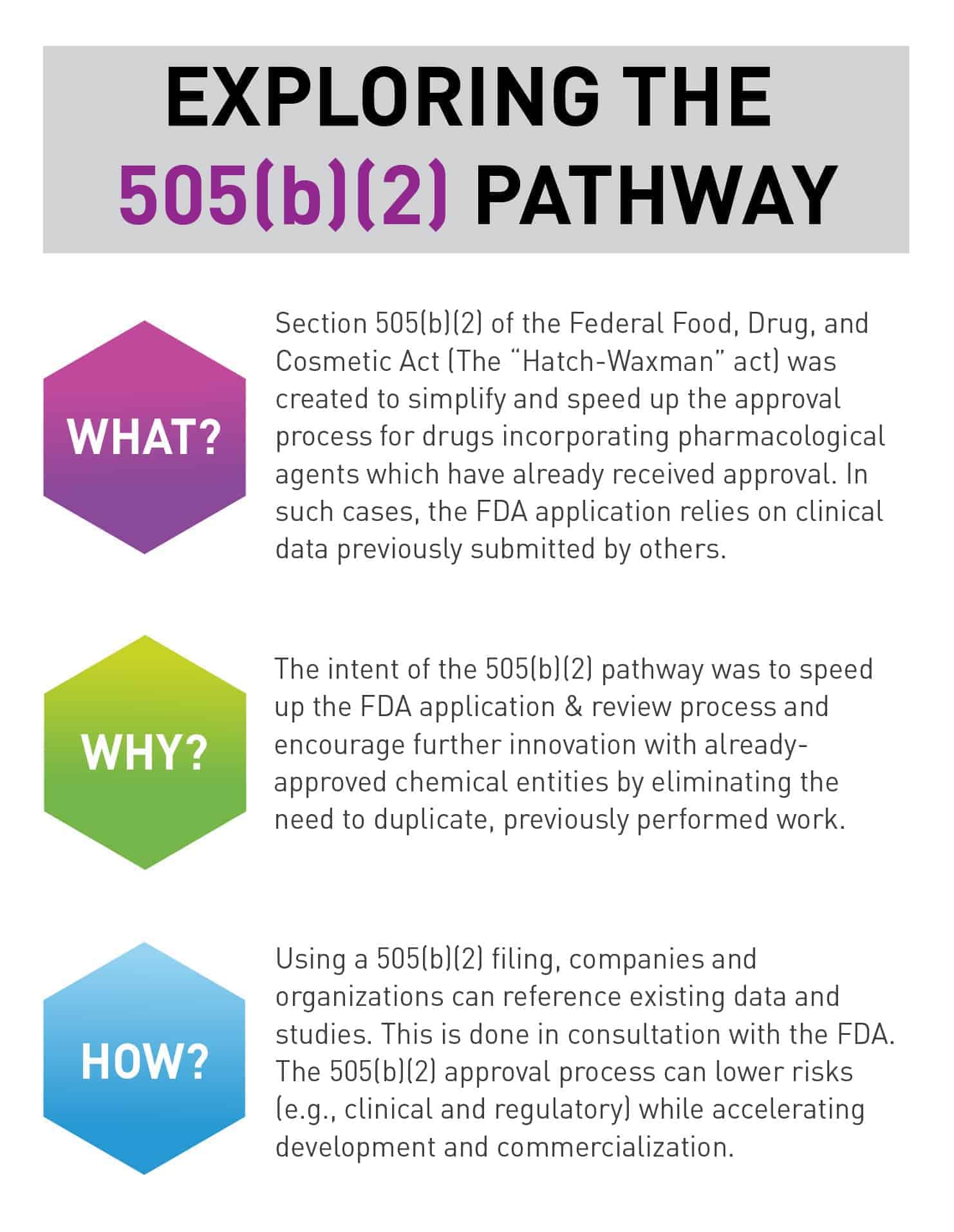 For those in the pharma industry, there is a clear-cut distinction between the two primary drug approval pathways: the 505(b)(1) NDA and the 505(j) ANDA generic pathway. NCEs, for which no clinical safety or efficacy data exists follow the 505(b)(1) pathway. Generics, which are essentially duplicates of an existing, approved drug, almost exclusively use the ANDA approval process. The midpoint between these two, however, is a bit fuzzier – and there are often advantages and disadvantages as to which pathway a drug developer should follow.

There are a number of situations in which the 505(b)(2) really shines. Companies with a novel device, delivery system, or delivery technology can take advantage of the pathway to use it for existing approved therapeutics.

In our experience, projects involving a modified mode of drug delivery are excellent candidates for the 505(b)(2) regulatory route.

For example, a new transdermal system can be introduced for a compound that has only been previously used via inhalation. The new drug uses the same therapeutic compound – and perhaps even targets the same indication – but it also solves a problem. In this case, the transdermal delivery system could replace a complex inhalation device which delivered poor efficacy due to dosing inaccuracies.

Likewise, a new delivery coating that allows a compound to survive the intestine can enable an oral dosage form, improving patient compliance and efficacy.

These are two examples of cases in which the 505(b)(2) pathway would prove its worth, allowing companies to take advantage of an existing therapeutic and get the new form to market very quickly. 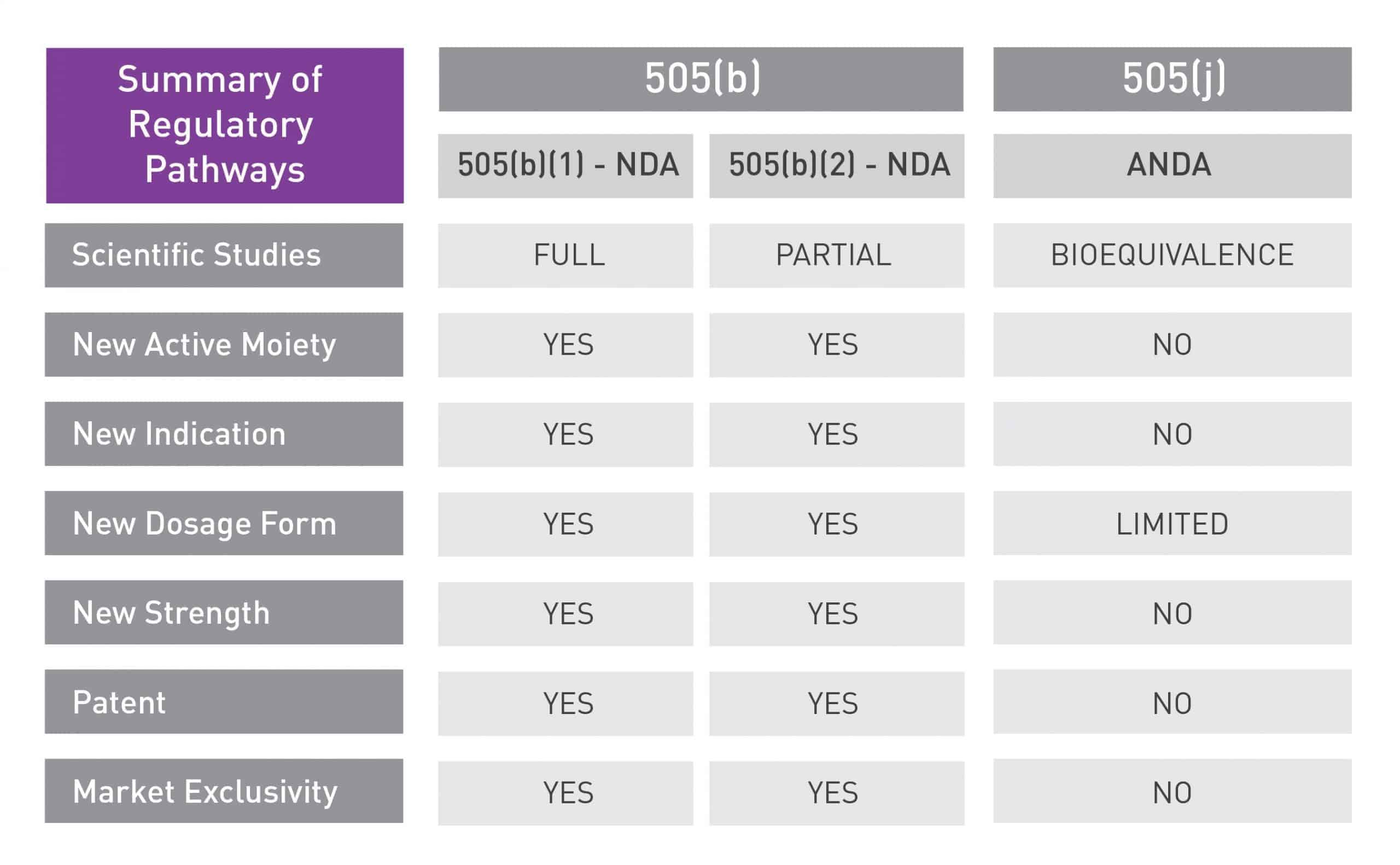 Supply Chain Challenges Along the 505(b)(2) Pathway
Because timelines are compressed, drug makers need to quickly establish robust supply chains. At LGM, we’ve found this is where companies often get tripped up. Here are 3 ways supply chain issues can impact a 505(b)(2) filing:

An Effective Option for Some Drug Candidates
The 505(b)(2) pathway’s popularity can be attributed to the benefits an ANDA and full NDA could offer – namely, a shorter, less expensive, lower risk process which still confers a period of market exclusivity. But while drug development & clinical risks may be mitigated, there are supply chain and manufacturing challenges your company must address in order to maximize the value of the pathway.

Reshoring Pharma – Where do We Stand Two-Plus Years Later
In case you missed it (and I don’t think anyone did): COVID-19 put pharmaceutical supply chains under...
Read More >
Preparing for DSCSA Track and Trace Implementation
Counterfeit drugs have become big business. In 2019, it was estimated that $200 billion worth of counterfeit...
Read More >
Niche Active Pharmaceutical Ingredients and How to Source Them
What is one of the most significant trends driving growth in the global API market? It’s the rise of...
Read More >

Reshoring Pharma – Where do We Stand Two-Plus Years Later